Sam Sorgiovanni has a special reason to celebrate this year (2017). It is the 20th anniversary of setting up his own yacht design studio in 1997, after having worked for the Australian shipbuilder Oceanfast for 12 years. 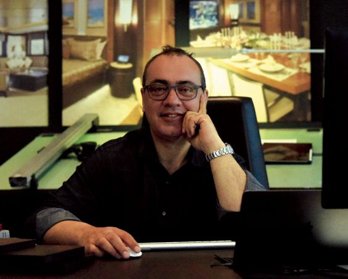 Sam’s years of studying Industrial Design finally paid off when he gained his BA and was taken on by Oceanfast. Here he gained valuable, world-wide experience in the industry, enabling him to succeed in his dream of owning his own design company. Sorgiovanni Design Studios is set up in Fremantle, WA and this is where he works with his team of design professionals when he is not travelling the world to consult with clients and shipbuilders.

Sam Sorgiovanni’s careful attention to detail, demand for excellence in every aspect of his designs and his creative thinking have all led him to become one of the world’s most renowned and sought after designers in the mega-yacht industry. He has been nominated and won many prestigious awards, ensuring his name has become one that is well- respected and that his reputation for excellence in design will go down in history.

Sam Sorgiovanni has designed many famous yachts that can be seen in harbours and at yacht shows all over the world. His expertise is easily seen in both the interior and the external design, combining practical elements with the dreams of the many owners – one of the main inspirations for his amazing designs. He also points to the Australian way of life as another element that has nurtured the skills he has developed for designing yachts.

With Australia being surrounded by water, the lifestyle is one where sea, sand and climate all play a large part in most people’s lives, as well as in the kind of industries that have sprung up. Australia’s relative isolation means that the innovations and skills for creating what is needed have had ample opportunity for development.

Sam Sorgiovanni also points out the necessity to keep one eye on the past in order to avoid making the same mistakes over again, which, he says, can still be seen in some designs today.

The hard work and talent bordering on genius in his yacht designs has seen the name Sam Sorgiovanni become synonymous with world-class resort style yachts that are nevertheless practical and capable of sailing wherever their owners desire, as well as providing the enhanced lifestyle they and their guests enjoy.